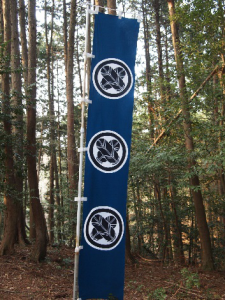 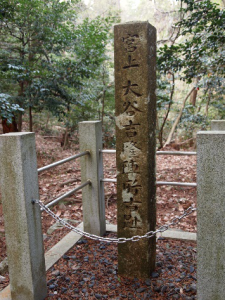 【Jinato of Otani Yoshitsugu】
A little bit lower place from Otani’s grave, where he put his army. Also why he set the army here is because he knew Kobayakawa Hideaki will turn in to East army. 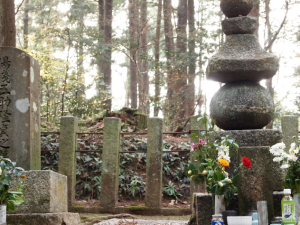 【Grave of Otani Yoshitsugu and Yuasa Gosuke】
After Yoshitsugu was betrayed, He have fought.
However his ally was losing one after another. In the end he gave up all hopes and committed suicide by the sword.
Yuasa Gosuke hid Yoshitsugu’s head in a secret place. However, he was found by the enemy. He said “I will give you My head, but please promise me, do not to tell anyone that here my master’s head is buried”.
Enemy killed him in last, but they kept the promise, and didn’t tell anyone that Yoshitugu’s head was there. 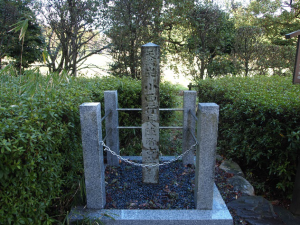 【Kitanotenmanyama / Jinato of Konishi Yukinaga】
At kitanotenyama, Konishi Yukinaga’s army was set. Konishi Yukinaga was a Christian. It is the place from where he gave a signal to his allies by sending a rocket in the sky, for letting them know that the battle has been started.
He had 6000 people in his army but after he know that Otani team was losing, he lost his willingness to fight, あand he lost the battle. 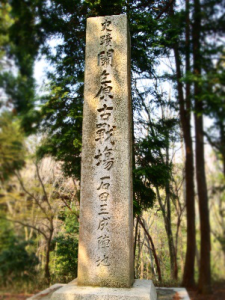 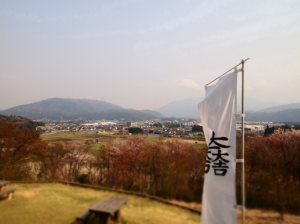 【Sasaoyama / Jinato of Ishida Mitsunari】
6,000 soldiers of Mitsunari Ishida was put double fence at front of this mountain. The vanguard command officer Shima Sakon commanded the army. It became a fierce battle.
This is also a sorrowful place where Mitsunari Ishida was betrayed and he had to suffer a defeat. 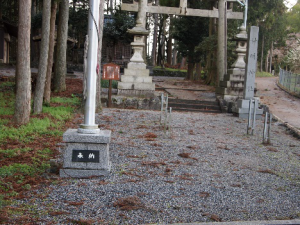 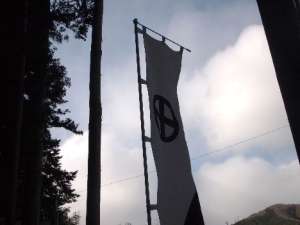 【Jinato of Shimazu Yoshihiro】
Shimazu set his army on a distance from Ishida Mitsunari’s army. He beaten the enemy by heavy gunfire. 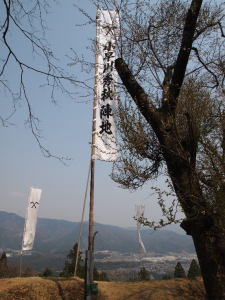 【Matsuoyama / Jinato of Kobayakawa Hideaki】
It is a place where Hideaki Kobayashi had set his army and could decide the result of the battle. Around 15000 soldiers were at the place waiting for a signal from Ieyasu, when a betrayal had occurred.
If you come here, you can feel what Kobayakawa was feeling. 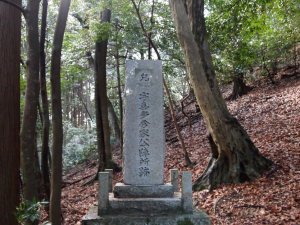 【Minamitemmangu / Jinato of Ukita Hideie】
Ukita Hideie was a second leader of West army. He had 17000 people of his army, But after Kobayakawa changed in to East army, his army couldn’t hold any more. He lost and needed to run away. 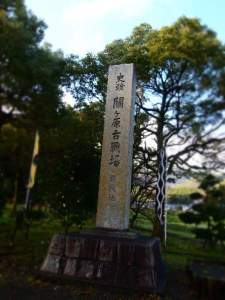 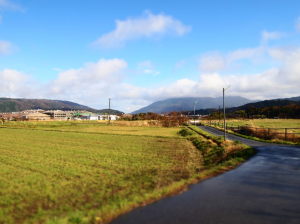 【Kaisenchi】
This is a historical place, where first Sekigahara battle was started. This is the place where every Commander had full strength, and the battle had started. Currently, there is a stone monument having ‘Sekigahara ancient battlefield’ carved on it. 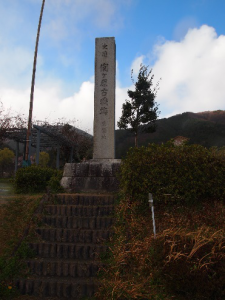 【Deciding Battle】
An act of treachery by Kobayakawa Hideaki made big change to the Battle.
East army was winning, and everyone was trying to get Ishida Mitsunari’s head at this place. It was a fierce battle. 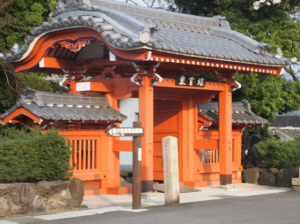 【Higashikubizuka】
It is called as “Kubizuka”. Kubizuka is a grave for who had decapitated. Only head is kept in this grave. Ieyasu told Takenaka Shigekado to bury the head at this Higashikubizuka. 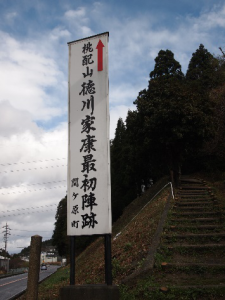 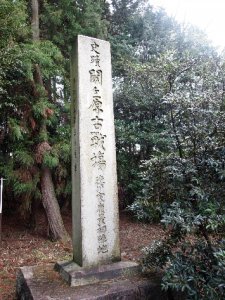 【Momokubariyama/ First Jinato of Tokugawa Ieyasu】
He chose this place because Ooyama Ohji fought at this place and he won. So Ieyasu decided to put his army here.
He won the battle because of strong determination. 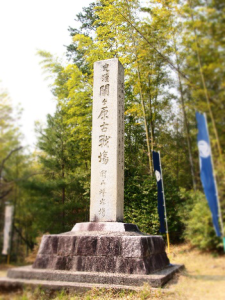 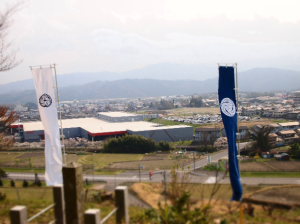 【Okayama(Maruyama)houkajou /Jinato of Kuroda and Takenaka】
Takenaka Shigekaru was in West army in the beginning.
However because of Ii Naosuke’s close relation with his childhood friend Kuroda Nagamasa, Shigekado went together with Kuroda Nagamasa.
It was quiet and important move at this important place. 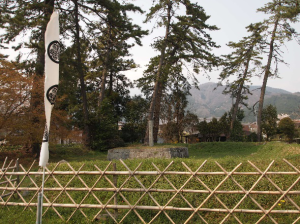 【Last Jinato of Tokugawa Ieyasu】
Ieyasu was getting nervous. So He moved his army at this place and gave a signal for betrayal, by discharging a gun.
He won this battle here.
After battle was ended he called lot of people, and checked the head of correct person. 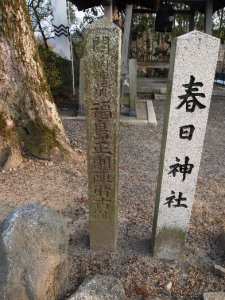 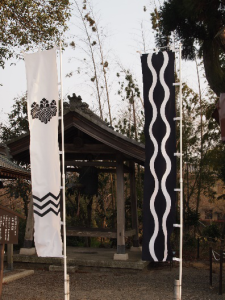 【Jinato of Fukushima Masanori】
Fukushima Masanori was liked by Hideyoshi but he did not get on with Mitsunari, So he joined the east army.
Here, there is a tree that is 800 years old called “Tsukimiya Oosugi”.
We can imagine this Tree was watching over the people who joined this Sekigahara battle. 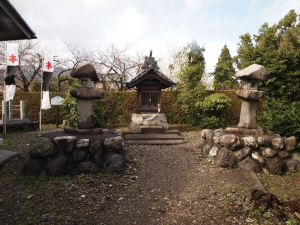 【Jinato of Honda Tadakatsu】
Honda Tadakatsu gave splendid performances in many battles.
In Sekigahara Battle he was Assistant Deputy General.
He set his army here and he defeated a lot of enemies. 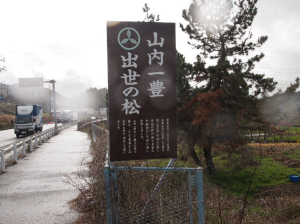 【Jinato of Yamaushi Katsutoyo】
At this place, there is a Family crest symbol of big pine tree and three leaves.
Hitoyo didn’t gave an outstanding performance in this battle, but He gave his Kakegawa castle to Ieyasu.
That made Ieyasu to trust him and he became sovereign of Tosa. 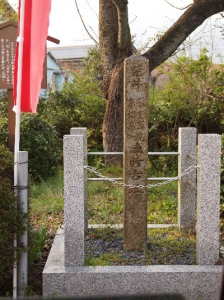 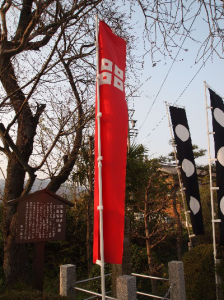 【Jinato of Todo Takatora and Kyogoku Takatomo】
Toda Takatora set his army as a second formation for Fukushima Masanori.
At 8 o’clock, when battle had started, they were fighting with Hiratsuka Tamehiro.
In the afternoon Takatora Todo and Hideaki Kobayakawa defeated Otani’s army.